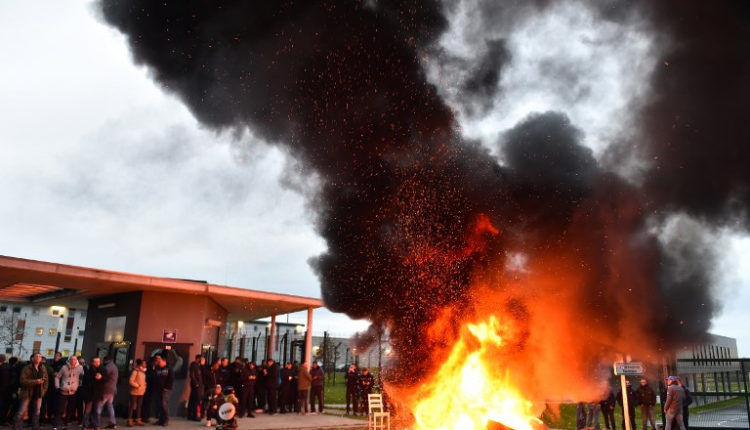 France – About 60 guards Wednesday blocked access to a prison in northwest France where a ‘radicalised’ inmate had seriously wounded two of their colleagues in a knife attack.

The guards torched tyres and palettes outside the high-security facility at Conde-sur-Sarthe in Normandy, AFP journalists said.

Several other prisons were also hit by blockades or walkouts by guards Wednesday morning to protest the attack, a union source said.

“Colleagues want to go to work but we do not abandon them, we do not send them to die,” a local union leader at the Fleury-Merogis prison outside Paris, Thibault Capelle, told AFP.

In Tuesday’s incident at Conde-sur-Sarthe, two guards were seriously wounded before inmate Michael Chiolo was shot and injured in a police raid that also fatally wounded his visiting partner.

Elite police units moved in some 10 hours after 27-year-old Chiolo launched the attack with a knife, which Justice Minister Nicole Belloubet suggested might have been smuggled into the prison by his female partner.

“There is no doubt as to the terrorist nature of this attack,” Belloubet told reporters.

Paris public prosecutor Remy Heitz said Chiolo had wanted to “avenge” Cherif Chekatt, who shot dead five people in an attack on a Christmas market in Strasbourg in December. Chekatt was shot dead by police after a two-day manhunt in the eastern French city.

Chiolo, who was serving a 30-year sentence, is thought to have become a “radicalised” Islamist while in prison.

France has suffered a series of deadly attacks from Islamist extremists since 2015 and is on high alert amid concerns about the return of Islamic State group jihadists from Syria.