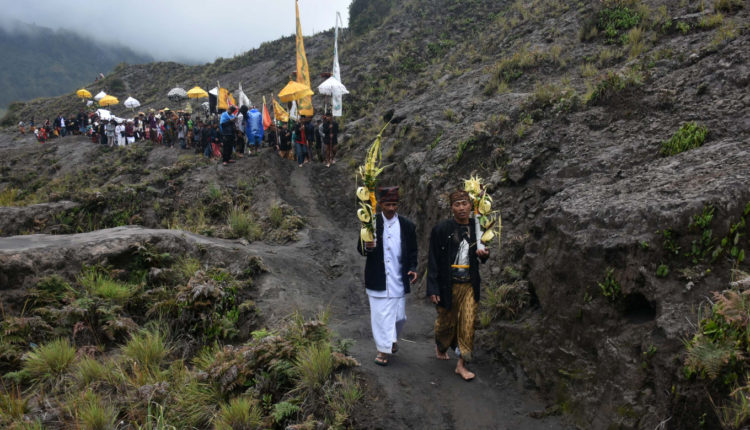 Tengger – On Sunday, thousands of Tengger people, an indigenous tribe living on Mount Bromo, East Java, made their way by foot to a holy water source inside Widodaren cave on the slopes of Mount Batok.

The cave is among the sacred places for the Hindu Tengger people and the water is usually utilized for rituals and daily activities.

Coming from Pasuruan and Probolinggo regencies, they carried offerings, heirlooms and various temple ornaments. The rain did not deter them from performing the Melasti (a Hindu ritual to cleanse the soul and nature) ceremony to welcome the Day of Silence, known as Nyepi.

This year, the ceremony was themed “Melalui Catur Brata Penyepian, Kita Sukseskan Pemilu 2019” (Through the Four Abstinences, Let’s Make the 2019 Election a Success).

Tarmuji, a pemangku adat (village elder trusted to lead the tradition), said that 13 villages and 13 Hindu temples participated in the ceremony.

“We pray for harmony among citizens, despite their different political choices,” said Tarmuji, “Hopefully, [the ceremony will help] to ensure peaceful and smooth presidential and legislative elections [in April].”

Although most devotees perform Melasti on the beach, Tarmuji said that it is not the case for the Tengger people as the nearest beach is located quite far away.

“But it’s basically the same thing. We take the holy water to bathe prior to Nyepi,” said Tarmuji, adding that they would also perform an ogoh-ogoh (giant effigy) parade and Nyepi ritual on Thursday.

“On Friday, each temple in the village will host the Ngembak Geni [Relighting the Fire] ritual to wrap it up.”

Sulist was among those who participated in the Melasti ceremony on Sunday.

He said the water he took would be mixed with bathing and drinking water at home, to be used prior to Nyepi.

“In the cave, we pray to God for health, salvation and successful farming,” said Sulist, who comes from the Tosari district.