Thousands surrounded by floods across Java 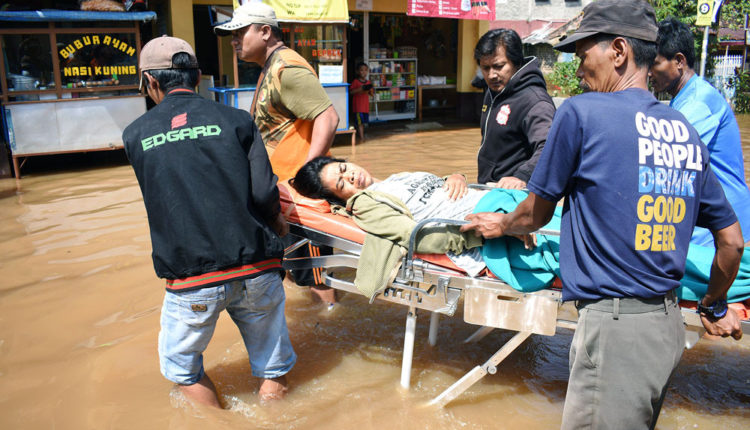 Bandung – More than 22,000 families in 10 districts of Bandung, West Java, have been affected by water from the Citarum River that flooded the area on Thursday, killing one.

The Bandung Disaster Mitigation Agency (BPBD Bandung) said rain that had started on Wednesday afternoon had caused floods of almost 3 meters in some areas. Baleendah district was the worst hit, with more than 5,000 families affected. The other districts that were also severely paralyzed by the floods are Dayeuhkolot and Bojongsoang. All three districts are located alongside the Citarum River.

The head of the BPBD Bandung’s emergency and logistics division, Sudrajat, said only 226 people from Baleendah had decided to abandon their homes, while most had opted to endure the high water. In Dayeuhkolot, 138 were rescued, including children, pregnant women and the elderly.

“There are 3,005 families affected in Dayeuhkolot,” said Sudrajat.

West Java Search and Rescue Agency spokesman Joshua Banjarnahor identified the casualty as Riky, 21, a resident of Baleendah, who was electrocuted inside his flooded home in the inundated district. He was accompanied by a younger sibling at the time of the incident, while their parents were out of town.

Joshua said the team was very cautious in conducting the rescue mission, since most residents had yet to turn off electricity. “We found the victim at 9 a.m. this morning,” he said.

The floods also cut road access from Dayeuhkolot to the nearby districts of Banjaran and Ciparay, making it hard for people to leave the flooded areas. “On the main street that connects Dayeuhkolot with Ciparay and Banjaran, water is as high as an adult’s thigh. Vehicles can’t pass the area,” said Joshua.

Last month, downpour in the regency caused the dam holding the Cinambo River in Pasar Jati to burst, resulting in flooding that claimed three lives.

In Central Java, a number of regions have been flooded following persistent heavy rainfall since Wednesday. Klaten regency is one of the most heavily impacted regions, with the Dengkeng River overflowing and flooding the surrounding regency.

Doddy Hermanu, acting head of the Klaten Disaster Mitigation Agency (BPBD Klaten), said residents were forced to leave their homes after floodwater engulfed hundreds of homes and some schools, with water levels reaching as high as 1 meter. “We are staying alert, because the sky is still overcast,” he told.

Doddy said the BPBD Klaten was trying to prevent further flooding. “We have put thousands of sand bags on the river embankment in a bid to hold back the floods,” he said.

In Wonogiri regency, hundreds of houses are also flooded, forcing hundreds of families to evacuate. The floods have also cut the road connection between the regencies of Wonogiri and Pacitan, where the water reached a level of up to 50 centimeters. “We have shut down the electricity in the impacted areas,” Bambang Hariyanto, head of the Wonogiri Disaster Mitigation Agency, told the Post.

“We are still in coordination with the regional administration for evacuation and aid distribution,” said Suban Wahyudiono, the head of the agency.

According to the agency, Madiun is the most impacted regency, because the Jeroan River has overflowed and flooded wide stretches of the surrounding areas.

The floods in Madiun have also cut roads access between Ngawi and Kertosono, with water levels reaching as high as 1 meter.